This blog described electronic components that can be used to support or interface to nanodevices.
I was looking for some info on test equipment and found myself at Engineering TV. This is an interesting idea. The videos seem to be of a reporter talking to a company product rep on the floor of a conference expo. The reporter interviews the person demonstrating a piece of equipment or new product. The information content varies a bit on how good and knowledgeable the report is at asking good questions.

Microwaves and RF magazine has produced their 50th anniversary issue. There are many articles that describe how microwave & RF technology has changed overt the years. One article that caught my interest describes the history of companies in the industry past and present: Where Are They Now?. I was surprise to see how many companies have come, gone, and merged. The US defense department spends $10B/year managing and mitigating obsolescence issues as reported in 2008 so this activity is a really issue for military projects and a potential opportunity for enterprising businesses, perhaps.

The Maker web site has posted an wonderful short video on how to read a schematics. The video is well done, informative, and has very good production values. Sweet. I feel they should have described the symbol for the transistor, but this is covered in the short article associated with the video.

The folks over at SemiWiki have posted a wiki on the SPICE & FastSPICE circuit simulators on the market today.

The Computer History Museum has set the web site An Analog Life: Remembering Jim Williams, and has an exhibit with Jim's workbench on display from Oct 15, 2011 through Apr 15, 2011. There is also a video of the panel discussion held at the museum that occur at the opening of the exhibit. 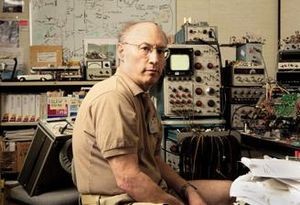 Linear technologies turns 30 this year after a group of engineers left National Semiconductor to start a high performance analog semiconductor company in 1981. EE Times has an interview with Bob Dobkin the CTO and founder of the company. I'm impressed that some of their original designs are still in demand and being sold. I like his insight that if you build the highest performance device and you don't have to do it again.

Sylvia's Mini Maker Show has posted a short video on a Super Simple Copper Etchingmethod. It's great and easy since you don't need a photo step to put you pattern on to the copper. You just rub it on from a image created on a plastic slide printed with the patten from a LaserJet printer. Ferric Cloride is used to etch the copper. She right in that it makes a big mess. Don't use it in the bathroom sink. Mom's get very mad. The stains don't come out.

Did not know that a planet and moon could be part of an electric circuit, but Saturn and Enceladus are part of a giant circuit. I wonder what could be built from such things and if there are any SPICE models available The analog design community suffered another tragedy. Bob Pease died in a car accident returning home from Jim William's funeral. Bob was a wonderful teacher and lecturer. I met him once at a National Semiconductor seminar in 2001. His Analog by Design TV show is still available on the web.

I was sad to hear that Jim William passed away recently. You can see Jim repair an old Tektronix scope in this video with Tom Osborn, and EDN has a nice article about Analog guru Jim Williams.

Make Magazine and NASA are sponsoring a contest for designer to invent satellite kits to teach high school students about space. Entries are due April 30, 2011.

It's not often you see stories like this. A single engineer-entrepreneur architected, designed, and built a System-on-Chip (SoC) single handedly to perform floating point operation using 50 to 100 times less power than available today. It's a fascinating story in EE Times blogabout Andreas Olofsson of Adapteva who took 3 month to convert his architecture to VHDL using the open source Verlator Verilog-to-c translator to verify the 10k lines of VHDL code for the design. He then taped out in 6 weeks and used a shuttle at semiconductor fab for his first prototype. He did this using his personal savings and money from friends and family. He met a customer that ended up funding his company with $1.5 M to go into production. Now that's one lean startup and supportive family.

The folks at Electronic Design Magazine have an interesting article describing small factor microcontroller boards and modules titled Buy your own Small-Form-Factor Boards and Modules. For quick inexpensive prototypes that are not too complex, I would also consider boards from:
I've only worked with the Kontron product quite a few years ago but the were well made and worked well. Before that, I worked with a uCDimm form factor processor board but the issue with this board is that it did not have a MMU which limits the OS selection.

If you haven't seen the video about the TI Robot Eval Kit you will might be impressed with what looks like a lot of functionality for a good price. The robot is based on the ARM Cortex M3 microprocessor but more details can be found in the datasheets. The robot kit also seems to include the uC/OS-III real time kernel operating system.

So, now I'm wondering how this stacks up with the Actel SmartFusion device which contains a ARM Cortex M3, an FPGA, and a programmable analog front end with ADC and DAC. The uC/OS-III also runs on the Smartfusion. The other question is how does the robot kit compare with the Lego Mindstorm NXT robot kit. So much cool hardware and so little time.

So I was rummaging through my spare and sample parts bin last week, and found an bunch of empty 32 pin quad flat pack packages. These packages might be good way to package a nanodevice and provide high-speed signal inputs and outputs, connections for DC bias, and perhaps room for a semiconductor based temperature sensor to make a good eval board to study device performance. The open package might also allow access to the nanodevice for functionalization or other modifications.

The package datasheet leads me to believe that it can operate to 18 GHz. I decided to build a mockup to show at the Princeton Graphene Workshop to get some feedback. What I learned surprised me but more about that later. The schematic for the mock-up eval board is shown below for a graphene FET assuming one could be purchased or fabricated. I propose, using a hexagon around a standard MOSFET symbol to indicate a graphene FET.

The top and bottom view of the mock-up is shown in the next two photos. The edge mound SMA connectors used in the mock-up are good to 12.5 GHz using flexible cable and 18 GHz using semi-rigid coax cable connections. The header is really a place holder for a dual row ribbon connector to allow twisted pair DC connection to the FET and source and drain resistors. A heatsink is connected to the bottom of the board to provide a good thermal path to the package and the graphene FET so that the temperature can be controlled using a TEC cooler or similar thermal controller. I used a flat pack prototype board for this quick mock-up but a real board would have multiple layers and use microstrip traces for good RF connections between the edge launch connectors and the package.

So to my surprise, the first person I showed it to was a theorist and did not have any input on the features, design, or practicality of the mock-up. I guess I thought that most of these new nanodevices are hand made so most people in the field would have more familiarity with hardware. Next, I spoke with and experimentalist and found that the design basically blows. To make Quantum Hall Effect (QHE) measurements and similar meV energy measurements, the temperature needs to be in the mK range so kBT energy levels are less than the energy levels that are to be measured. Thus, the semiconductor temperature will not work because it's only good to -50 °C. The other problem is that electrical connections also conduct heat into the device being measured and this interferes with getting good results. The measurement bandwidth is around 100 GHz so the package is no good either. I'm shocked to find such hard core hardware requirements are needed to measure QHE conductivity and the like.

Well, back to the drawing board. An new package and connector are needed. The table below indicates that a 1.0 mm connector would be a good candidate.

I discovered some energy harvesting modules a few years ago made by Advanced Linear Devices and bought a couple of modules as a kit through Mouser to experiment with energy harvesting. The kit costs around $125 with shipping and included a EH300 module rated at 4.2 mJ and 1.8 to 3.6 V operation, and the EH300A module rated at 30 mJ and operates of the same voltage range. For a perspective on the how much energy these modules can store please seen my Nanoblog Work, work, work. The following two photos shows the front and back sides of the EH300 module.

I hooked the output to an LED with a 91 ohm series resistor. The LED would dissipate 36 mW or 36 mJ/s. I got a piezoelectric film strip with a neon bulb attached to it at a conference expo. When you wave the the bulb around on the end of the strip hard enough, the bulb will light up. I thought this would be a great way to harvest energy so I cut the bulb off and wired the strip to the connector cable assembly and plugged the strip into the module. You can see the module, LED, and resistor in the photo below. After that, you cans see the piezoelectric film strip. I got tried of trying to charge the caps in the module so I carefully stuck the film strip into the blades of a muffin fan. The end of the film strip start to break off so I taped the end with electrical tape to protect it. If you connect the LED onto the module after it's finally charge, it flashes for an estimated 111 ms. I could improve the performance by selecting an more efficient LED but that might keep it on for 200 to 300 ms. The task now is to find a piezoelectric material that can produce more continuous power.

The last photo shows the EH300A module and cable assembly.